Welcome to Guests from Thailand

On October 5, 2012 Pokhara University and Sinawatra University established a formal relationship by signing an MoU at Kathmandu where Her Excellency Thai Ambassador to Nepal Mrs. Kanthong Unakul was also present in the signing ceremony.

As a continuation of this relationship Pokhara University invited the President of Shinawatra University Prof. Dr. Voradej Chandarasorn and his team from Sinawatra University including the Thai Ambassador to visit Pokhara University. On May 1, 2013 PU authorities: Vice Chancellor, Registrar, Deans of different faculties and Executive Director of International Centre welcomed the distinguished guests at Pokhara. During the meeting, discussions were held about the possibility of establishing a Thai Corner in the University Library. Further, the Vice Chancellor emphasized about faculty exchange and also hinted that time has come for both Management Deans office of two Universities to work out seriously to do something concrete regarding the exchange program. 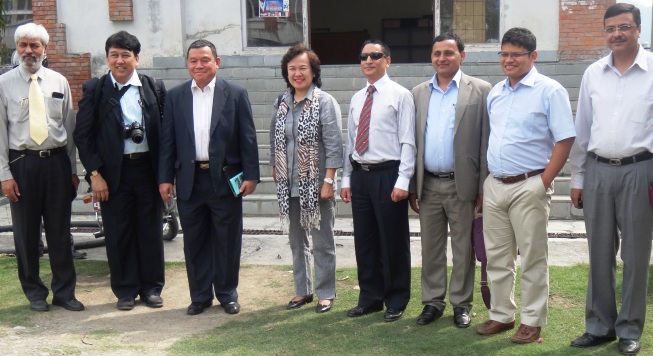 After the visit of the library, the team had a meeting in the Korean Information Access Centre where the Dean of Management Studies, Dean of Humanities and Social Science, Director of International Centre, faculties from School of Business and staffs were present. The President of Shinawatra University assured to provide two scholarship quotas for Ph.D. programs. Furthermore, the President emphasized to start faculty exchange program in the area of Finance and Accounting as soon as possible.